“Travel is at its most rewarding when it ceases to be about your reaching a destination and becomes indistinguishable from living your life.” -Paul Theroux

In the heart of Luzon, flanked between Zambales to the west and Bulacan to the east lies the gastronomic capital of the Philippines, Pampanga. Long before it got its well-known moniker today, the province was once known as La Pampanga which was designated by the Spaniards. The unique appellation stemmed from the encounter the Spaniards had with natives who were living along banks or “pampang” in Spanish of the Pampanga River in 1571, marking it as the first Spanish province in the Luzon Island. Today, this quirky little province is home to the world-renowned sisig and the finest Philippine dishes. Apart from Pampanga’s obvious flair for culinary masterpieces, the province is also known for its annual Easter re-enactment of the crucifixion of Jesus Christ and come Christmas season; holiday revellers can enjoy seeing the giant Christmas lanterns. The province has come a long way from being known as the land of natives living by the riverbanks, but their long and colourful history remains.

Apart from the diverse tourist attractions and the bustling nightlife, Pampanga also houses world-class resorts, casinos, golf courses and duty-free shopping. With all these attractions, you are guaranteed a myriad of activities whenever you are in the city. From the heritage sites, historical churches to the array of various restaurants, your one-day itinerary to Pampanga is sure to be full of things to do. Here are some of the places you should definitely not miss during your visit.

It is a known fact that the Philippines traces some of its roots to the Spanish colonization, and a concrete evidence of that is the remnants of Spanish culture and heritage sites. Apart from that, the country is peppered with ancient and historic churches. Pampanga has its fair share of them. The San Guillermo Parish Church, an old church originally established by Augustinian Friars in 1576 used to be a placed of worship but is now known as a local tourist spot owing to the devastation that hit it back in 1995. Half of the church is buried from the lahar flow caused Mount Pinatubo’s eruption. Aside from taking photos, one should never miss visiting the museum located in the church complex.

Next, to the San Guillermo Church, your next visit should be JB Betis Woodcrafts in Betis Guagua, Pampanga where you can appreciate the finest wood creations made by wood connoisseurs. From furniture to statues, every wooden creation is an evident showcase of their expertise which is obvious from the meticulously fine details etched in their products. If you are looking to fill your home with locally made furniture that is nonetheless impressive, the town of Betis is your best bet.

What is a trip to Pampanga without indulging your palate and sampling some of its finest epicurean delicacies and famous dishes? And what better way to satisfy your appetite than beginning it with a hearty and savory lunch? In a grandiose ancestral Mexico, Pampanga lives Atching Lilian, one of Pampanga’s culinary virtuosos. Considering that she is a master at her craft, Atching Lilian is a known culinary historian and hosts a cooking show. A tour to her place is not only limited to eating her food but would also entail a tour in her kitchen where she would show you her antique cookware collections as well as a demonstration of how making San Nicolas cookies, Pampanga’s famous dessert. Everyone visiting is required to bring their big appetites with them as after the tour you are treated to a buffet of food she has specially prepared. Included are some of Pampanga’s famous dishes such as Tamales, Morcon and Dinuguan. 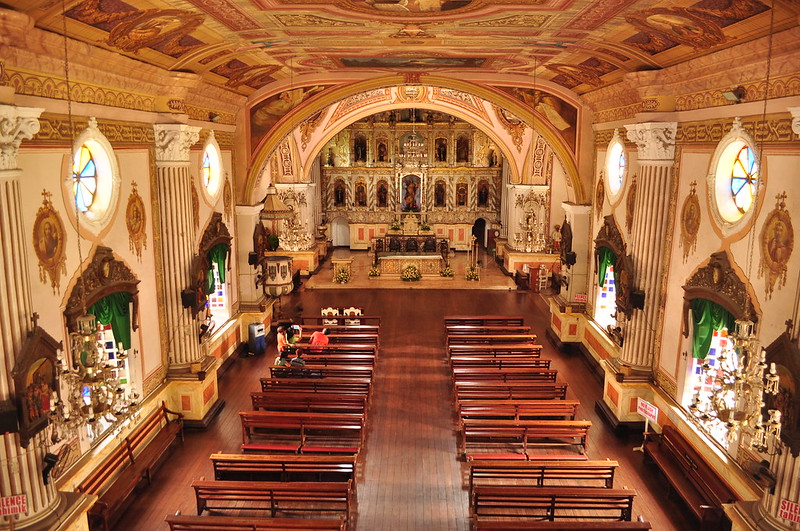 After lunch, a visit to another church is in order. Though relatively unknown, the town of Betis has its own local version of the Sistine Chapel which is the St. John the Apostle Church (Betis Church). Built in the 18th century by Augustinians, the Betis Church is incredibly well-maintained, and the imposing structure remains majestic until today. Considering its grand architecture and impressive wall murals, the church is rightfully protected as a National Cultural Treasure. Though a lot of pictures of the church have surfaced online, nothing beats seeing this marvellous and historic structure for yourself.

End your trip with a visit to the Pinatubo Museum, one of Pampanga’s newest tourist attractions and is a recent addition to the Center for Kapampangan Studies. With its opening just last June 14, 2016, on the 25th anniversary of the eruption of Mt. Pinatubo, the museum features a mural timeline of the history of Mt. Pinatubo. Additionally, one can observe the many various exhibits by Joel Mallari and mural sculptures by Arnel Garcia.

I am a traveller used to surf across the world and write my experience over multiple blogs to help the other travellers. You can also visit my blog www.TodayIntelligence.com

Best Sailing Destinations in the World

Practical Tips for Visiting Paris in 2019: How to Avoid Mistakes